Time has been flying by this month and I’ve ended up posting this a lot later than I thought I would have. This post is a bit of a mash up of my reading over the last two weeks before Christmas – Christmas posts to follow shortly!

After my bout of complaining about Sense and Sensibility I did manage to complete Emma. I even enjoyed it. It was the first time I had read it, and found its silliness somewhat light relief after ploughing through Sense and Sensibility. I loved the character of Emma’s father; his gruel in the evening, panic at dining in company, wariness of chills, robbers, colds, overexertion, wet feet, mist, marriages… As for Emma herself, I thought she was pretty lucky that everyone was so tolerant and adoring of her. I’m not sure she’d get the same reaction today – although Cher was pretty believable in Clueless. I wonder if Austen felt a little bit of glee in sending up women like Emma (I hope so!). I suppose I read Austen for the marriages not the money, although I did miss having a heroine I truly wanted the best for.

I called it a day on Advent with Austen after that, but I was pleased with what I managed. I read Death Comes to Pemberley, Jane’s Fame, Sense and Sensibility and Emma. My conclusions are: I admire Austen for the legacy she has left and I have no desire to ever read an Austen spin off. At long last I have read all of Austen’s major novels and my order of preference is:

I didn’t get to read Claire Tomalin’s biography or Lady Susan, The Watsons and Sanditon, but thats okay – they’ll just sit snugly on the shelf until their time comes.
Following the Austenathon I needed something new, but guaranteed to be brilliant. I started writing a round up of the this years reading when the solution was obvious – Margaret Atwood. She is one of my very favourite authors, who I first discovered back in January. I read The Handmaid’s Tale and was immediately hooked by Atwood’s immense talent and sheer genius. She is so intelligent and such a brilliant writer. She creates characters I feel I know inside and out, people I’ve lived with, loved, parted with, and missed as soon as the book is over. I then picked The Blind Assassin and Alias Grace to read back to back and loved them both too. So I chose the last two Atwoods on my bookshelf to see the year out as it began. 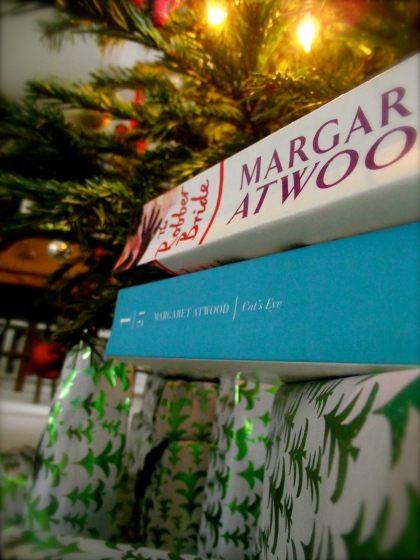 Cat’s Eye or The Robber Bride? I could read them both (and did!) but which to start with? I read the opening lines of both:
‘Time is not a line but a dimension, like the dimensions of space.’ – Cat’s Eye
‘The story of Zenia ought to begin when Zenia began.’ – The Robber Bride
I eventually picked Cat’s Eye because of the introduction by Ali Smith – nothing but praise, enthusiasm and an urging sense that not reading this book means you are missing out… It turns out I had been missing out, because Cat’s Eye is a fantastic book. I absolutely fell in love with the main character, Elaine. The book is about childhood, growing up, bullying, depression, creativity and the passing of time. It was such a realistic portrayal of childhood innocence and the way the rituals and games of youth are remembered. This has definitely overtaken The Blind Assassin as my favourite of all Margaret Atwood’s book which I’ve read so far.

The Robber Bride didn’t hook me in quite the same way: it wasn’t instant love like Cat’s Eye but a growing interest in the characters. Zenia is a fantastic literary villain – after a few chapters I couldn’t believe how much I disliked her! I can’t recommend Margaret Atwood’s books enough, because I haven’t read books by many other authors with such a fantastic imagination.

6 Comments to “Endings, of Sorts”