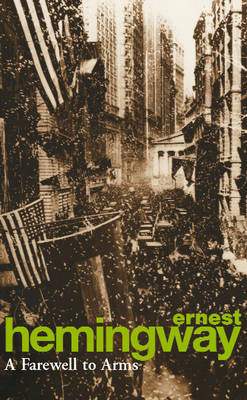 I picked A Farewell to Arms to follow Birdsong because I thought the two books would be quite different. Hemingway is writing in part from his own experiences as an American soldier in the Italian army who whilst fighting for the same side is likely to have faced different situations from an English soldier in France. There were great differences in the authors’ writing styles. Hemingway is cold and clinical with description whereas Faulks does not shy away from long descriptive passages. I thought both books were very moving, but for different reasons: I knew the characters in Birdsong, I was attached to them, and I was given a lot of sensory detail about their situations. A Farewell to Arms was completely different: The matter of fact way that Hemingway describes events makes reading them feel like you are being punched in the stomach.

What made this book stand out for me against other WWI novels was its portrayal of the relationship between Catherine and Henry. Unlike Stephen and Isabelle in Birdsong, romance was flesh and blood in this soldier’s life and not just a haunting memory. However, I’m struggling to work out what Hemingway means by writing women the way he does. F. Scott Fitzgerald said that Catherine was the weak link in A Farewell to Arms and I think I’m inclined to agree. She seems to be slightly unnatural, maybe a bit one-dimensional. What is she really like? I’ve no idea.

The last thing I picked up on when I read A Farewell to Arms was how many soldiers died outside the battlefield. They were shot by superiors, caught the flu, starved, or succumbed to medical complications. Death takes on a completely different meaning during wartime and the grim reality of dying seems to spiral out of control.

What makes this such a worthy war novel is the ending.

DON’T READ THIS LAST BIT IF YOU DON’T LIKE SPOILERS:

Catherine and the baby dying hammers home the message that no good has come of this war. No new life, no regeneration – what has been destroyed by war will always have been destroyed. If Henry had gone on to live a happy life with wife and child the book wouldn’t have been the same at all – you can’t un-see things, you can’t undo war.