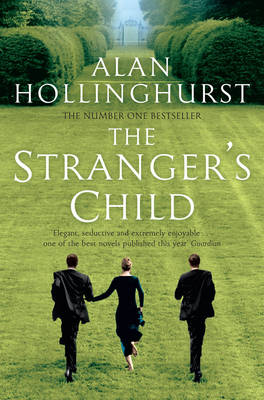 I had been eagerly anticipating The Stranger’s Child and read it as soon as it came out in paperback. (Love the cover.) I’ve classified it as a war book for this reading project, although it isn’t a war book in the sense that my three previous books are. The story begins just before WWI and jumps forward in time. It is a novel about how history and family stories change over generations, and shows how times changed because of the war.

For the sake of clarity, the story is split up like this:

The first part of the book was definitely my favourite – I can’t get enough of this era at the moment! The way Hollinghurst writes about these grand country houses and bright young people is romanticised without being unreal, like nostalgia about childhood. It was a very atmospheric beginning to the book which would have been worth reading even if the rest of the book had been terrible (which it wasn’t). A frustrating, but unavoidable outcome of this book forever jumping forward in time is that you get really attached to characters who are dead in the next section and unfortunately the characters got less and less like-able down the generations.

I thought the different attitudes to the romantic relationship between Cecil and George were well written: Their relationship is obviously hidden at the time, but later revealed by the biographer. The differing reactions between family members and critics were amusing because everyone seemed to have their own agenda for their opinions, rather than the discovery of truth. An unavoidable aspect of humanity, really!

Reading this like a war book, I suppose the message would be that WWI stopped people in their tracks. The men who survived and the women at home carried on with lives when the war was over, but on a slightly different course. It was very much as though they sidestepped onto a path parallel to where they had gone if the war hadn’t happened. An interesting thought created by this book is that the people who are revered and celebrated for their deeds during the war can only have their stories told by other people. History is singing with lost voices.