I’ve been on a literary trip to Stratford-Upon-Avon and the humble origins of William Shakespeare.

Whilst I was there I saw Shakespeare’s birthplace (see above photo) as well as the house he bought for his family towards the end of his life. Although a lot of the house is gone there is an ongoing archeological dig for the foundations which you can look into.

Of course there was time for a little bit of second-hand book shopping, where I found these great editions of Middlemarch and Jane Eyre.

They were both printed in the 1960s by Zodiac Press – the patterns on the covers really caught my eye.

The main reason for the trip was to see an RSC production of Much Ado About Nothing.

It was absolutely BRILLIANT. The play was set in contemporary Delhi and it really worked. The whole Indian spectacle and traditions surrounding marriage made a very natural mix with Shakespeare. Meera Syal played Beatrice and completely stole the show – whenever she was on stage I was mainly watching her. Being well known for comedy, she delivered all of Beatrice’s put downs and jokes like she had written them herself and the banter between her and Benedick was such a highlight.

Stratford is a couple of hours away by train, so I read Bill Bryson’s Shakespeare during the journey. I got the book as a Christmas present and I can’t recommend it highly enough! It is a great, very readable introduction to the life and times of Shakespeare. Bryson doesn’t try to hide that there are very definite limits to what we can know about Shakespeare. Instead he puts the facts forward and guides the reader through the various theories that scholars have come up with. He adds a perfect amount of background history to support his own leanings. I also really liked that he doesn’t subscribe to the conspiracy theories about Shakespeare either – this book is very much grounded in what can be proven.

The trip and the production have renewed my interest in Shakespeare – I was obsessed as a teenager and loved when I got to study the plays at school. I have read The Sonnets and a handful of plays and I’m inspired to read more, so I’ve created a page to follow my progress at the top of my blog – or you can click here to see it. As usual I have no time limit on this challenge, it is just something I’d like to do. I will be using a copy of The Norton Shakespeare for most of the plays and all of the essays. 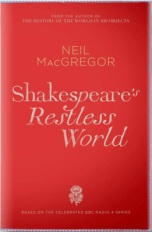 Incidentally, Shakespeare’s Restless World comes out at the end of September and I can’t wait to read it. Neil MacGregor is curator of the British Museum and the author of The History of the World in 100 Objects. This sounds like a similar premise – discovering Shakespeare’s world through twenty different objects.

At the moment, my all time favourite Shakespeare play is The Tempest, although I do have a soft spot for the ones I did at school; Othello and King Lear. The Histories are probably the plays I am looking forward to least, they seem the most intimidating although I’m not entirely sure why.

What is your favourite Shakespeare play? Have you read any great books about Shakespeare? Recommendations are very welcome!

10 Comments to “Travels With Shakespeare”