What Anna Karenina Made Me Do Next

I am going to make a bold claim. I have an all time, number one favourite book. My top ten, top five books change all the time, but first place never does. Anna Karenina is my favourite book because I think it is the best book ever written. 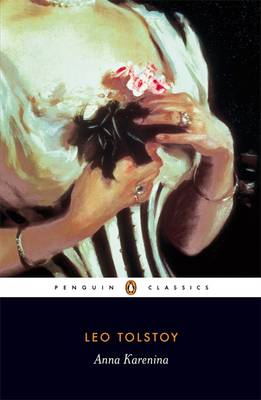 This claim is particularly bold because of the following confession: I have only read it once. Several years ago.

Having been to see the new film earlier this week I have been thinking about how much I love it and how I really should read it again.

Russian literature is something I have not got a lot of experience of, yet all the Russian classics I have read I have really enjoyed. So, after reading this article  about the top five books Russian writers on the Penguin Classics website, I have decided that next year I shall read something by each writer. The top five Penguin choose are:

I reckon this should get me off to a good start in finding more Russian books and authors I’d like to try. I’ve studied The Cherry Orchard by Chekhov and have absolutely no memory of it at all, so that doesn’t count. I’ve read Lolita but would love to read another Nabokov too. I’m pretty sure Crime and Punishment is on my Classics Club list because I have my dad’s old copy floating around somewhere so that will take care of Dostoyevsky and after that – we’ll see.

I am putting this goal off until next year because I am determined to read the following by the end of the year:

I am confident about having three definite good books to see the year out with. If I get time I’d love to read Les Miserables, but I think I’d struggle to read so many huge books in what now seems like not much time! Plus, I do need to leave some time free for some wintery books when the weather changes.

Here’s to favourites and spending time reacquainting yourself with them.

These reviews should perhaps be subtitled Why didn’t I read more classics? I feel guilty sometimes for never reading new writing, so this month I tried to even the balance. But really new books are much more hit and miss than classics: A sentence that once written seems incredibly self-evident. The two books I absolutely loved were A Change of Climate and On Chesil Beach. Maybe not surprising if you’ve read either of my previous thoughts about Hilary Mantel or Ian McEwan. Most disappointing was definitely John Saturnall’s Feast, the book not for me was NW and the one that was OK was The Greatcoat.

A Change of Climate

Yes, Hilary Mantel can do no wrong. Yes, I will now be endeavouring to read her non-historical novels. A Change of Climate is set in Norfolk, South Africa and Botswana (then Bechuanaland) and tells the story of Ralph and Anna, two non religious missionaries. Professional do-gooders are not something I’ve come across in real life, although I think more people do it than I had thought before reading this book. They begin their married life travelling from one mission post to another, eventually raising a family in a gigantic, temperamental, ramshackled old house in Norfolk. Really what the book boils down to is whether or not you can lead a good life: Can one man or woman make any real difference? Can you ever know what goes on behind closed doors? Are secrets ever worth keeping?

I can’t talk about the secret in the book because to know it before you read it would (in my opinion) completely ruin the story. But what made this book for me was what Mantel manages to achieve in all of her novels: characters. She can write characters like Tolstoy. Complete, three-dimensional, real, never unconvincing, human characters. And she doesn’t judge them. Secondly: setting. Perhaps a stupid comment to make but I’m making it nontheless: I’ve never been to South Africa or Botswana, but they felt real to me. I never read Mantel and feel like she is trying to show off how much research she has done (although there must be a lot, I think) and nor do I read it and think she’s just making stuff up. The landscapes here were amazing – and what a great contrast between Norfolk and Africa.

I’d really recommend this book because it is so original and so thought-provoking. I will think about it for a long time to come.

This was my third Ian McEwan novel, I’ve loved all three so far, the other two being Enduring Love and Atonement. A very short novel, only five chapters, which alternate between back story and the present. It is a story about two young people on their wedding night and almost solely surrounds their inability to accurately read the other person. I agree with Nish’s review:

This book is much, much more than the sum of its parts.

Even though the book did not heavily rely on plot I didn’t expect the outcome of the story to be exactly what it was. It was kind of heart breaking in a very subtle sort of way – as I suppose any story centered around a misunderstanding is bound to be. The characters seemed true to life because in a relationship I think we do suppose the other person to understand us. Perhaps this is too modern a reading as couples in the past would maybe just not know each other as well before marrying. I think McEwan’s decision to set the novel in the 1960s is interesting because it forces him to qualify to the reader that this all before the swinging part of the sixties! He could have set it earlier just as easily, but I suppose this is to contrast with the attitudes that were about to change.

I won’t spend as long talking about the books I didn’t enjoy as much because whilst I personally didn’t like them, I wouldn’t want to deter people from reading them.

In a Parade’s End update I am now onto the last of the four volumes: The Last Post. And then – where next? Definitely more classics.