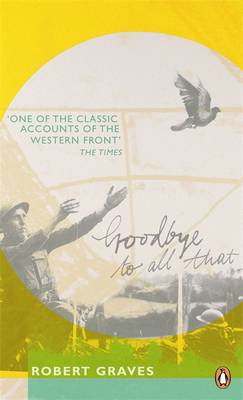 I am so pleased to have finally read this book, I loved it, and reading it after All Quiet on the Western Front was perfect timing. Robert Graves’ autobiography is totally gripping and completely different to what I was expecting – Goodbye To All That covers the horrors of war in a really cold, detached way. The opposite of Remarque’s emotional prose, but just as moving. A real testament to how good this autobiography is: even the beginning was interesting. Normally, I’m not a fan of the first few chapters of biographies, but Graves writing made me interested in everything he had to say. His childhood seemed to be a quintessentially English upper class one, although a boys boarding school seemed to be not without its own problems! This was so readable because of the immediacy, his memories are very clear and honest.

Graves spent his army life as an Officer, mostly at the front, until he was wounded. There are the horrible scenes you would come to expect in a truthful account of the trenches but the part that separated this for me was his thoughts about the continuation of the war past 1916.

We no longer saw the war as one between trade-rivals: its continuance seemed merely a sacrifice of the idealistic younger generation to the stupidity and self-protective alarm of the elder.

What has made this book stand out from the other war books I have read so far, is that the book continues after the war. I suppose because there was a future for Graves, although it wasn’t the one he may have thought about as a young man prior to his army life. I really enjoyed reading about his marriage to Nancy, a feminist quite ahead of her time! His life as a poet also meant he was meeting a lot of writers who we now regard as iconic, like Siegfried Sassoon, T. E. Lawrence and Thomas Hardy. A really sad part towards the end is when Graves mentions losing his son in the Second World War. As his generation becomes the elders, his children suffer the same horrors.