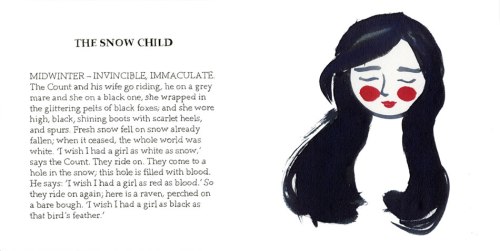 The title is the opening line from Angela Carter’s short story The Snow Child. This is a dark beginning to my 24 days of posting, but there will be plenty of time for festive reading, I promise.

The story is the shortest in her collection The Bloody Chamber and is based on the Brothers Grimm version of the fairy tale. A Count and Countess are out riding when the Count conjures a child as white as snow, as red as blood and as black as a raven. I won’t give away the whole story though in case you want to read it for yourself.

Carter stays true to the traditional, dark fairytale and manages to capture a lot of gothic imagery (puddles of blood, anyone?). In just two pages, she also manages to provoke a lot of thought about the difference in male and female status. There is a real mix of passivity, aggression and desire.

Despite these heated things this is a winter story, and the cold prevails. The characters are riding through a frozen landscape where everything is blanketed by layers and layers of white. However, more chilling are the characters themselves: The Countess in her spiky boots and spurs is so cool she could crack. I could really picture her seething on the inside but showing nothing but a glittering and icy exterior.

The child is nothing more than the snow she is created from.