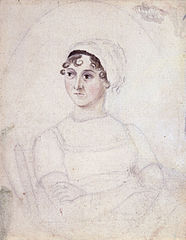 I’ve started reading Sense and Sensibility for the first time and it wasn’t until chapter ten that I suddenly thought… Sensibility… What is it? Austen’s titles are so recognisable that I never thought about the words she chose for them. A little bit of afternoon research and I feel better! Sensibility isn’t a word we use now, but it was quite the concern of the eighteenth century.

Sensibility began as a scientific concept quickly adopted by philosophers. It is based on people’s perception of and response to events. It seems to be an emotional and intellectual concern – people with sensibility often showed signs of extreme distress, tenderness and ‘fine feeling’. This popular idea inspired writers who turned it into a literary movement: the sentimental novel. For example the narrator of The Sorrows of Young Werther demonstrated a very exaggerated response to unrequited love which led to young readers following his unwise example *spoiler removed, sorry Jillian!*.

The sentimental novel seems quite similar to gothic novels: I’m particularly thinking of Ann Radcliffe’s heroines! They faint at a moments notice, love passionately and unwaveringly, and weep at the beauty of mountains. There are a couple of other authors who wrote novels about sensibility that were admired by Jane Austen, for example Samuel Richardson and Frances Burney. Towards the end of the eighteenth century the sentimental novel was no longer popular; perhaps sensibiity had become cheapened; the activities involved in being ‘sensitive’ became more associated with illness. Sense and Sensibility was a latecomer to the genre, and satirises the sentimental novel by contrasting sensibility with actual sense and reason: Elinor Dashwood is sensible and considering, whilst Marianne Dashwood is passionate:

Elinor has not my feelings, and therefore she may overlook it, and be happy with him. But it would have broke my heart had I loved him, to hear him read with so little sensibility.

I’m quite good at avoiding ever finding out the plot of classic stories if I’m likely to ever read them, so I have never seen an adaptation of Sense and Sensibility or let anyone tell me anything about the plot, so I’m curious to discover – reason or emotion – which will prevail?

And so, Advent with Austen continues. I finished Claire Harman’s Jane’s Fame last night but I think I will wait until the end of my Austen adventures to review it.

3 Comments to “Sorting Out Sensibility”